History of the Pennsylvania Sinfonia Orchestra 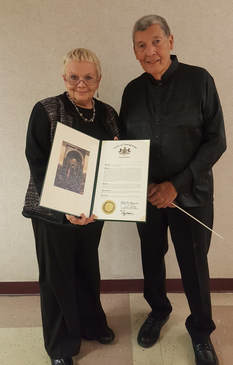 On the occasion of the Sinfonia's 35th Anniversary season,
Founder and Music Director Dr. Allan Birney
receives a congratulatory proclamation from the
Senate of Pennsylvania, presented by Ellen Kern,
Chief of Staff for Sen. Patrick M. Browne.
April 7, 2018
As we take note of our PROUD HISTORY, LIVELY FUTURE, it’s interesting to recall some of the events that have shaped the character and growth of the organization.

1982- Noteworthy! The Pennsylvania Sinfonia Orchestra presents its first subscription season at Allentown College (now DeSales University) in Center Valley. The group establishes its approachable attitude from the start: the entire audience was invited to receptions at Allan Birney’s house after the concerts.

1983 – Valley Vivaldi, the Sinfonia’s summer Baroque chamber series begins. It has become a staple of the summer music scene ever since. Early concerts were held at Muhlenberg College Chapel, Williams Center at Lafayette College and Foy Hall at Moravian College. Cedar Crest College soon became a long-term venue; Valley Vivaldi is now heard at Wesley Church in Bethlehem as well.

1991- Allan Birney receives the prestigious Arts Ovation Award from the City of Allentown, recognizing his many outstanding contributions to the performing arts in the Lehigh Valley.

1991- The Sinfonia holds its first Art Auction, which has become a festive annual event, and an important fundraiser for the organization. After several years at the Barristers’ Club (formerly the Women’s Club of Allentown), the Auction moved to more spacious accommodations at the Brookside Country Club.

1992-  In its gala concert “Mozart at the Movies,” the Sinfonia demonstrates how classic music by Wolfgang Amadeus Mozart translates seamlessly into contemporary film scores.

1994-  Candlelight Music for Lovers, a Valentine’s Day dinner dance, makes its appearance as a signature Sinfonia fundraiser. The tradition continued for twelve years.

1995-  Louisiana pianist Michael Gurt brings his 1,000 watt smile to Allentown, and wins the hearts of the Sinfonia audience. Michael has been a perennial soloist and good friend to the orchestra ever since.

1996- The Camerata Singers perform Beethoven’s 9th Symphony at an All-Beethoven Gala. This is just one of many collaborations over the years in which the Singers, trained by Allan Birney, join the Sinfonia for great choral works by Beethoven, Mozart, Mendelssohn, Brahms, Bruch, Schonberg and others.

1998-   Allan Birney and the Sinfonia present the Lehigh Valley premiere of concert opera to critical and audience acclaim. Professional, costumed soloists, along with the orchestra, perform Mozart’s Cosí Fan Tutte at the Zoellner Center for the Arts.

2000-  The Sinfonia sponsors a monumental series, free to the public: Bach’s complete works for clavier, presented in fifteen concerts over five weeks. Benedictine monk Father Sean Duggan interprets the exuberant works on piano to enthusiastic audiences. In the ensuing years, Father Sean returns again and again to perform with the Sinfonia, with Valley Vivaldi, and in recital.

2001-  Violinist Elizabeth Pitcairn joins the Sinfonia for Dvorak’s Concerto in A Minor. She performs on the outstanding 1720 Stradivarius Violin, the “Red Mendelssohn,” said to have inspired the film The Red Violin.

2002- Cellist Gavriel Lipkind tackles the technical difficulties of a Samuel Barber concerto with authority and musicality, interacting with the Sinfonia musicians with great sensitivity.

2003- Shadowcatcher is rich, descriptive piece by living composer Eric Ewazen that was inspired by Edwin Curtis’ photographs of the American West and Native Americans. While several of those photographs are projected above the stage, the Philadelphia Brass Quintet, together with the Sinfonia, create a memorable season operner.

2006-  Conrad Tao, 12-year-old violinist, pianist and composer, dazzles the Sinfonia audience with his multi-faceted talents in a program that Allan Birney designed to showcase all aspects of the young musician’s virtuosity.

2007- Young and old alike spend a delightful Afternoon with the Animals. John Grogan, author of bestseller Marley and Me, narrates Camille Saint-Saens’ Carnival of the Animals, in which each instrument portrays the personality and mannerisms of a different animal. Following the concert, a book signing and children’s activities round out the fun.

2007- The Sinfonia commands a large, appreciative crowd at an indoor concert at Musikfest with its popular Valley Vivaldi format.

2012-  Violinist Karina Canellakis plays one of the most exquisite renditions of Vaughan Williams’ The Lark Ascending that listeners are likely to hear in their lifetime.

2013- Pennsylvania Sinfonia Orchestra, together with Mock Turtle Marionette Theater, premieres the “Museum of Music,” an innovative puppet show presented in schools. The show reveals how great classical music has evolved from common music of cultures around the world. Sinfonia’s own musicians play and interact with the cast of large, colorfully-costumed instrument-playing puppets.

2014- Dynamic saxophonist Ashu thrills listeners with his pizzazz and panache, performing Piazzolla and Glazunov with the orchestra.

2016- Allan Birney introduces to the Lehigh Valley a pianist on the upswing of a soaring career. Months before his appearance here, George Li won the Silver Medal at the 2015 International Tchaikovsky Competition in Moscow.

2016- Sinfonia extends free admission for all concerts to students through college age.

2017- Infectious rhythms pervade each piece on the concert "Classics Take a Latin Beat," featuring Jordan Dodson, "One of the top young guitarists of his generation."

There have been many memorable moments in Sinfonia history. Please don’t be disappointed if you didn’t see your favorite listed here. Give us a call and tell us what performances or events stand out in your mind. And remember, the list doesn’t stop here. We’re looking forward to a LIVELY FUTURE. Don’t miss a beat!